The knight aragonais Calixte and his cousin Mercurial came to the Louron lands in the 10th Century to fight the Moors.

They arrived by the pass of Azet, situated in front of the village of Cazaux-Fréchet. Calixte crosses the valley, to go to war alongside the inhabitants.

After a terrible battle, Calixte was fatally wounded and his body put down on a flat stone, now known Saint Calixte's burial place.

In spite of his death, the battle was won and the grateful inhabitants built a church carrying the name of the brave knight.

He become a mythical saint, and the origin of an important cult of  Middle Ages to modern times. His life was celebrated on the same day as the homonymous Pope, October 14th.

(Please note that there are several versions of this legend.) 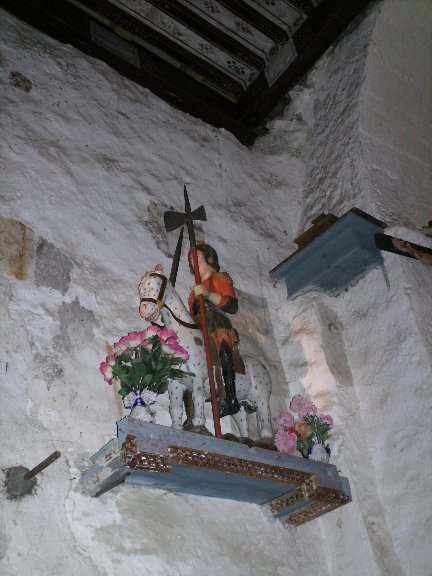 Mercurial and Vielle-Louron, another legend of Louron...

The cousin of Calixte, the knight Mercurial, becomes established, him, on the village of Vielle-Louron. He tried to make renounce his religion to the head of the Moors deducted to Camors, a hamlet of our municipality, which would fire its name of " Moorish Camp ". The head Moor, irritated, eventually attacks with fury the troops of Mercurial. The legend says that Mercurial lost an arm in the fight but continued it of the other one! Regrettably, it fell too under the enemy chains. Quite as for Calixte, the inhabitants of Vielle-Louron made of Mercurial their patron saint and built him a church (Saint Mercurial, classified as "Historic Monument"). Mercurial is celebrated on every August 26th. His relics are always in the church.