The Romanesque paintings of the choir

Situated in the apse, and hidden behind the altarpiece, this first set dates from the late 12th or early 13th Century. 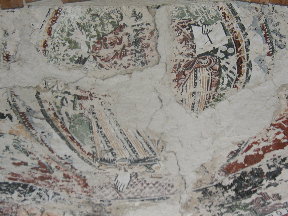 In the centre of a vast Mandorle appears a figure of Christ in Majesty. His face is hidden by a vault supporting the altarpiece. Of the right hand he blesses, and of the left he holds the Book of Life placed upon sound knees. We can also distinguish his right foot. He surrounded with the symbols of the Evangelists : angel of Saint Matthew and Marc's lion or Luck's bull .
Below, represents the Apostolic school, which is difficult to identify.

This is a well-kept drawing with a rich colour palette. The artist who restored it has mastered his technique. We are also lucky to possess at Saint Calixte the original pigments.
At the beginning of 2000s, this Romanesque set appeared to be the only one of its type kept in the department of the Hautes-Pyrénées.


The 15th Century paintings of the choir

These are situated under the Romanesque set, painted on a layer of filler. In all likelihood they are covering over previous paintings.                              In signt of the tracks left in the fresh filler, the det was certainly completed by wooden boards. One of these boards is reused in summer behind the altarpiece. This set consists of a series of 4 scenes. From left to right these are : the Worship of the wise men, the Whipping, the Crucifixion and the fight of Saint Calixte and Saint Mercurial against the Moors. 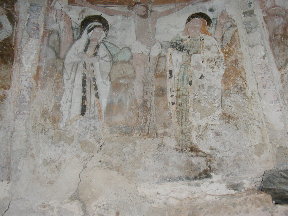 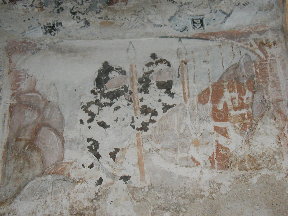 These scenes painted on the wall, completed by wooden boards, feigned the skeleton of the altarpiece such as it is imposed in France and in Ctalonia, from the 15th Century.


The sixteenth century saw the realization of numerous works to Saint Calixte. During this time the ceiling was implemented and the addition of the chapel made, including the purchase of a bell. There was also the realization of new paintings on all of the walls. Regrettably, the majority of these paintings were covered with a layer of lime further to the epidemic of Spanish flu which touch the region in 1918. Some of these images are re-emerging as the lime falls.
Only the painting in the vault of the north chapel is completely visible. 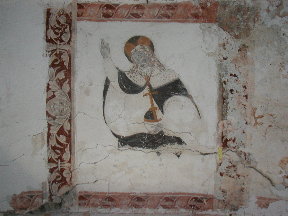 It is a representation of God the Father. Of the right hand he blesses, of the left he holds the Globe. He surrounded with borders decorated, consisting of several strips which each have a different motive.
We can learn about this painting by studying another painting in the church of Saint Barthélémy of Mont, a nearby village. This is by the same artist, Melchior Rodigis, and come from Saint Bertrand de Comminges. They date from 1563 - 1565.

Put in the 16th Century, it was painted only by 1720, after the altarpiece was completed. 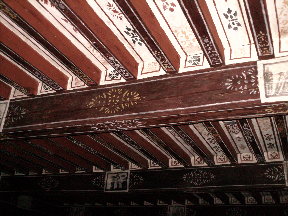 It is a ceiling with visible joists, in a French-style that is usually reserved for the civil houses. The motifs are painted onto the joists by stencil and represent biblical scenes. These feature episodes of the life of the saints as well as the fight of Saint Calixte. The paintings are simply treated in black and white, as engravings.


The altarpiece and the equestrian statue

The Valley of Louron, quite as her neigbour the Valley of Aure, houses numerous altarpieces. This is due to sculptors' local workshops, and very active retabliers, in the seventeeth and eighteenth centuries. They also represent a little of revolutionary acts in these valleys. 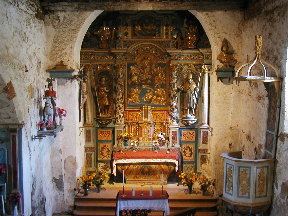 Saint Calixte's altarpiece is one of first works of a leader of the time, Marc Ferrère. For the most part it shows a fidelity to the aesthetics of the previous decades : rigorous composition, columns trunks, evangelists' statues put on the ledge. However, the presence of two fluted columns is new. Two large-sized statues occupy each a side of the altarpiece. On the right is, we suppose, Saint Bertrand de Comminges whilst on the left is Saint Calixte. Ordered in 1709, it was paid over some nine years and was painted and gilded only in 1728-1729. 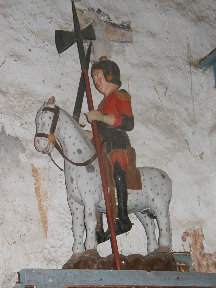 On the left-hand side, in front of the altarpiece,is held Saint Calixte's representation on by horse. This dates from the sixteenth century and is rare for its time. It would appear that is was created by a local artist. When we look at it, one element strickes us, the look of the horse, which does not look like a charger ready for the fight !